by Richard Schechner and Joan MacIntosh 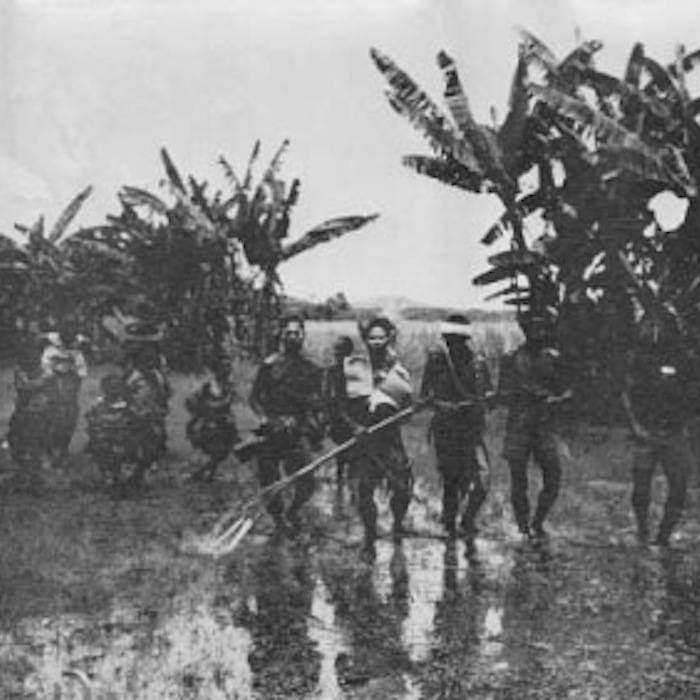 The music on this tape was recorded by Joan MacIntosh and Richard Schechner during March 1972 when they traveled both in the Highlands of eastern Papua-New Guinea (PNG) and up the Sepik River on that country's northern coast.

PNG is part of a very large island--the eastern half is independent (though it was administered by Australia in 1972) and the western half is part of Indonesia. The whole island is still largely tribal--more than 600 languages and many different societies. These share a certain underlying unity but still preserve an extraordinary diversity and oral culture rich in dancing, singing, drama, mask-making, and ceremony.

The highlands of PNG contrast of a mountain rim, some points soaring above 10,000 feet, and a central valley at about 7,000: it's reasonably cool even though latitude is tropical. A dense jungle and very few roads mean that cultural diversity exists. The people are just now being introduced to the technology of the 20th century. For thousands of years previous their cultures have been oral, small, aggressive. A lot depends on ceremony, initiation rites, exchanges of pig-meat, ritual warfare, sorcery; and these items are often expressed theatrically and especially in music and dance.

Our fieldwork techniques were simple: we rented a small car and drove part of the road from Goroka to Mount Hagan. Whenever something seemed of interest we stopped: a village, a group of tribespeople walking the road, an Australian outpost. Our recording equipment was a Sony monaural cassette recorder. We recorded all the songs we could. Because MacIntosh is such a fine singer we offered to exchange her songs for those of local people--and everyone took up the offer. We spent two weeks on the road.

Occasionally we watched ceremonies, like the great pig-kill and exchange of meat dance at Kurumugl; once we flew further into the interior, where there were no roads, to an outpost at Boisemaru.

The lowland Sepik is much different than the highlands. On the slow river that makes its way barely above sea-level nearly parallel to PNG's northern coast the temperature is hot, the air humid. The people are more worldly-wise than those in the highlands. There has been much commerce and contact from both Europeans and Pacific peoples. The ceremonial life along the Sepik is appropriately slow, but also magnificently on a large scale. Some events take years to unfold completely. What we were able to glimpse in two weeks was a bare sense of these peoples' gifts as architects, mask-makers, dancers, singers, chanters. Their palm-frond matting, with carved posts and masks embroidered into their very structure, they are like organic medieval cathedrals. Their carvings of cult-figures, of birdmen; their masks of tortoise shell, of bamboo and palm, of straw, these all show a great artistic gift. Also their music and dancing. We worked our way along to Sepik going from village to village in a hollow-log canoe and its outrigger for our luggage.

The Sepik villagers are professional artists--they earn their living, or part of it, by carving, dancing, singing (usually all of these). Their craftwork is used not only in ceremonies but as items of trade both to tourists and all along to river.

Two other tapes of New Guinea music recorded by MacIntosh and Schechner are available on New Wilderness Audiographics cassettes.

Joan MacIntosh is a performer and winner of the Obie Award. Among her roles: Mother Courage in "Mother Courage," The Star in "The Marilyn Project, and Jocasta in "Oedipus." Richard Schechner is a theater director and has also founded the "Drama Review." He formed the Performance Group, active since 1968 in environmental theatre. His books include "Environmental Theater (Hawthorne Books, 1973)" and "Essays on Performance Theory (Drama Book Specialists, 1977)."