7703C - There are Different Kinds of Writing 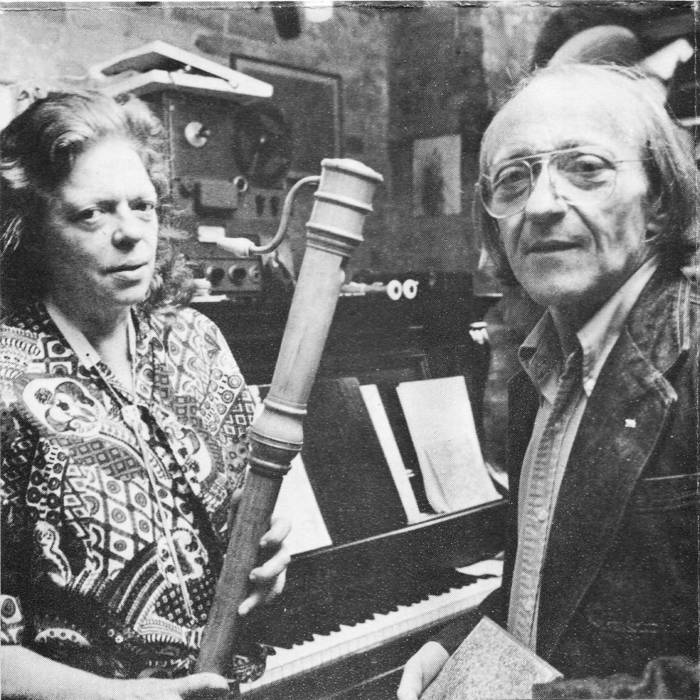 "There Are Different Kinds of Writing" is a collaboration between writer/storyteller Spencer Holst and composer Tui St. George Tucker. The text is a series of short prose pieces, the beginnings of stories which were never finished. These are separated by short microtonal bass recorder solos.

"There Are Different Kinds of Writing" was first performed, over radio station WBAI-FM New York City, in the late 1960s. It is an early vision of "Pleasures of the Imagination," included in "Spencer Holst Stories," published by Horizon Press.

Spencer Holst is a writer and is also known for telling his stories. (Allen Ginsberg called him "an old indian Aboriginal storyteller"). Holst is famous for the many readings he gives both of his own and other artists' work. He says: "The most heightened sense of reality that I have ever felt has been at certain times when i am reading to an audience. Whether that person is in my living room or is a thousand miles away listening to those words on a radio--it is the same--I am at the right place doing the right thing at the right time. Everything else, it is like a dream.

"I came to New York at 16. From Toledo. My great-grandfather founded a paper in Ohio (The Western Avalanche), and my grandmother and father were newspaper columnists in the Midwest, but I ran away to be a poet. I fancied myself a poet until I was 23. Then I started writing and telling stories… I never try to express myself one whit--I sometimes come into the story as the author, but I never mean me. Good writing is selfless. I have no particular aim except to tell a story… I'm a first line writer, i follow where it goes."

Spencer Holst has many admirers among the avant garde--people who follow and praise his work. John Cage was moved to write:

theSe stories
were written by Playing
thE typewriter,
the author is a magiciaN, what that means is
you Can
rEad
a stoRy --

you can know it by Heart --
you saw him dO it --
but you stiLl can't figure it out,
and the typewriter he uSes is
jusT an ordinary typewriter.

Two collections of Spencer Holst's stories are available in print:
"The Language of Cats and Other Stories": McCall (NYC, 1971); Avon Books (NYC, 1973)
"Spencer Holst Stories:" Horizon Press (NYC, 1976); Berkley Windhover Books (NYC, 1977). This collection won the 1977 Richard and Hinda Rosenthal Award from the American Academy and Institute for the Arts and Letters.

Tui St. George Tucker is a composer. She describes herself as "underground." She is also a conductor and a recorder virtuoso.

Born in California in 1924, she was named after the tui bird of her mother's native New Zealand. She started studying music at seven. At twenty, she moved to New York and has lived there ever since. In the summer, she goes to the Blue Ridge Mountains of North Carolina, the inspiration for much of her music.

Micro- or quarter-tones are a prominent feature of many of her compositions (including "There are Different Kinds of Writing." She started working with quarter-tones in 1955. One of the first pieces utilizing this technique, "Sonata for Solo Recorder" -- "The Bullfinch," was inspired by Spencer Holst's story "The Bullfinch and Goblin." In talking about Tui St. George Tucker's use of micro-tones, a reviewer has said: "They are beautiful sounds, breaking from tradition only if we take a very rigid view of what tradition is… she employs these devices in music that is a delight to the unbiased ear, pieces that are melodic throughout, of traditional form basically, whimsical and often dreamily lyrical, a sort of contemporary counterpart of the Telemann Fantasies."

She has written music, micro-tonal and not, for almost every medium. Many of her compositions are church music, or have a religious feel. In 1976, her works were featured in "Meet the Woman Composer" series at the New School in New York.

Many of Tui St. George Tucker's compositions have been published by Anfor Press and Harold Branch, Inc. both of New York.

This cassette was co-produced by Denis Thalson, Barbara Baracks, and Charlie Morrow.