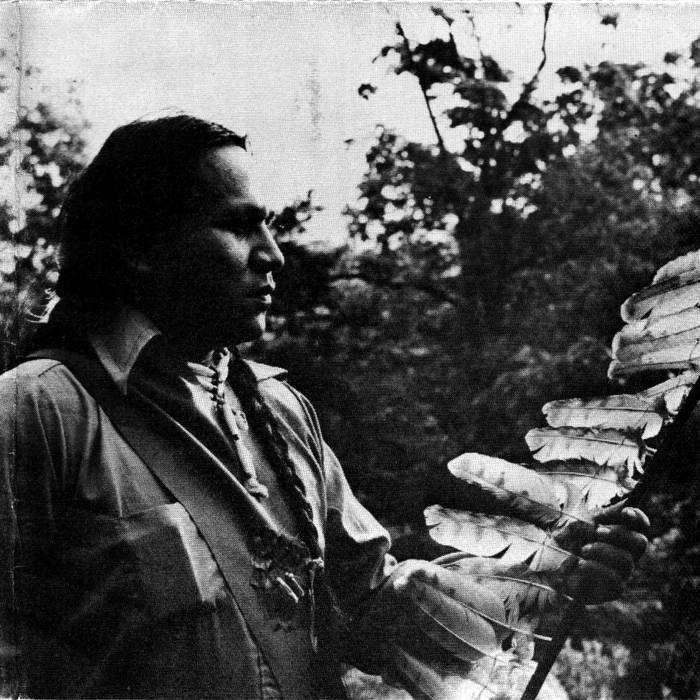 This tape contains Native American Peyote Songs, sung by Leonard and Mary Crow Dog. The style is non-traditional, using material from the Sioux and other Native American sources, as well as material of their own.

"Leonard Crow Dog is a traditional Sioux Medicine Man from the Rosebud Reservation in South Dakota. He is widely known as an Indian Civil Rights Leader. He was medicine man to hundreds of Native Americans who occupied Wounded Knee in 1973, and is recognized as a spiritual leader by more than eighty Indian tribes. He is the director of the annual Sun Dance of the Plains Indians. Thousands gather each year at his place, called "Crow Dog's Paradise," for this most solemn of all Indian rituals. Crow Dog has also revived the old Ghost Dance, suppressed and unperformed since 1890 when 300 peaceful ghost dancers, mostly women and children, were massacred by U.S. troops. Crow Dog is a Yuwipi--a healer, finder, interpreter. He is also the road Man of the Native American Churhc--in other words, a priest of the Peyote Cult using the sacred cactus as a sacrament in the ceremonial meetings of the religion.

"'Grandfather Peyote,' says Crow Dog 'is a teacher. He teaches us to know ourselves and to see the world around us with our hearts rather than our eyes.'

"The members of the Crow Dog Family are traditionalists who, for generations, have preserved the Sioux tribal culture and religion, in spite of years of repression by missionaries and bureacrats. Rituals, songs, legends and tribal history have been faithfully transmitted from grandparents to grandchildren. Song and religion being inseparable, all members of the family have always automatically also been musicians. Crow Dog's old father, Henry, has always been known as a fine singer. So are Crow Dog's sisters and his wife, Mary. Even his small sons Richard and Pedro, the latter only four years old, sing vigorously and beautifully during all rituals. Crow Dog's grand-uncle, Fool Bull, who died recently at the age of almost a hundred years, was one of the last Sioux flute makers and players. Crow Dog himself is recognized as an innovative musician who makes up many of his songs, rendering them in a uniquely individualistic style. He is possibly the finest Peyote Singer of our time.

"Sioux songs mainly fall into two categories: old style Sioux, and Peyote. It is the Peyote songs which are heard on this tape. The Peyote Cult was introduced among the Plains Indians comparatively recently, during the second half of the 19th century. It became a major religion among the Sioux only in the teens and the twenties of this century. Peyote music is markedly different from traditional Sioux music.

"The instruments used during meetings of the Native American (Peyote) Church are the gourd-rattle, the small water drum and the feather fan. Each worshiper, in turn, sings for four songs as gourd and drum go round and round.

"Sioux music is haunting and compelling. It expresses the zest, as well as the sadness of life. It reverberates with the sounds of the Indian's environment--the sounds of nature and the cries of animals. In its high-voiced Brave Heart songs it thrills singers and listeners with the fighting spirit of a people struggling bravely for survival and the preservation of a way and philosophy of life." --Richard Erdoes

Richard Erdoes is an artist, photographer, and writer who was actively involved in Indian causes through the second half of the twentieth century and is known and respected by Indian tribes throughout the country. He has written several books and many articles on Native Americans.
credits